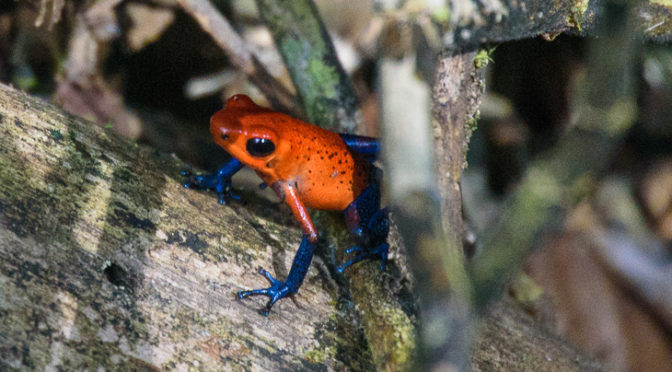 My first organised tour was to LaSelva a nearby biological research station to which students come from many affiliated universities. In a group of five I was guided round the wide concreted tracks in the forest. The leaf-cutter ants also find these a convenient highway but know to keep to the edge in order to avoid being trodden on.After leaving the open area around the reception buildings we soon crossed the Sarapiquiriver and entered the jungle. The bridge gives a higher level view which enabled us to spot some small bats resting in a tree. Our next sighting was of a tiny red and blue poisonous frog (blue jeans frog) and a small lizard, otherwise the sightings were mostly of birds high in the trees, notably the large Keel-billed Toucan and a Pale-billed Woodpecker, striking with its vivid red head and black body. Towards the end of the tour we saw a giant bullet ant which is reputed to have the most painful sting of all insects, a pair of even more giant centipedes and a group of peccaries (a sort of pig) crossing the path, but my only shot of the peccaries shows them disappearing into the undergrowth.

Back at the lodge the bird feeder was again the main point of interest. It is situated just below the open dining area next to a pond where red-eyed frogs can be seen at night. (Flash is not allowed though so no pictures of them were possible.) Birds seen this time were: Montezuma Oropendula, Black-cowled Oriole, Golden-hooded Tanager, Passerini’s Tanager, Shining Honeycreeper (male and female), Red-legged Honeycreeper and Green Honeycreeper (female).