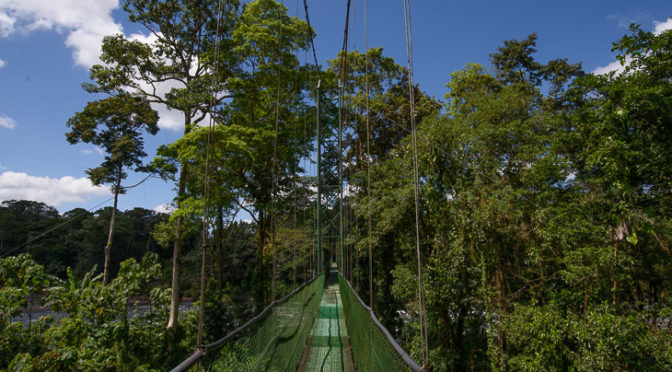 For my last day in the Northern part of Costa Rica I needed another interesting destination and on recommendation of the lodge staff I arranged to visit Tirimbinaa nearby private park like La Selva also spanning the Sarapiquiriver. In the morning I walked round all the (single trail) tracks open to the public, about 5 km. I only caught glimpses of fleeing lizards but the track is itself ectacular with 2 long suspension bridges over the wide river and some other parts with smaller wooden bridges and stairs. The jungle vegetation is very luxuriant and one sees plants which look the same as our houseplants but about ten times the size. There are not many flowering species in the lower level of the forest but some could be seen in the more open areas, such as pink bananas. The park is all very controlled and one wears a band on the wrist for identification although I only met two people on the entire walk.

In the afternoon I took part in a guided tour on which I was the only customer.The young lady guide was very helpful in finding what I wanted to see including a big male howler monkey, which was hanging from the wires of the suspension bridge and did not seem at all disturbed by us. At my request she was able to find a Sloth and somelarge Green Iguanas both male and female. The RoufousMotmot and theRainforest PitViper on the path were welcome extra. The latter is an endemic species.