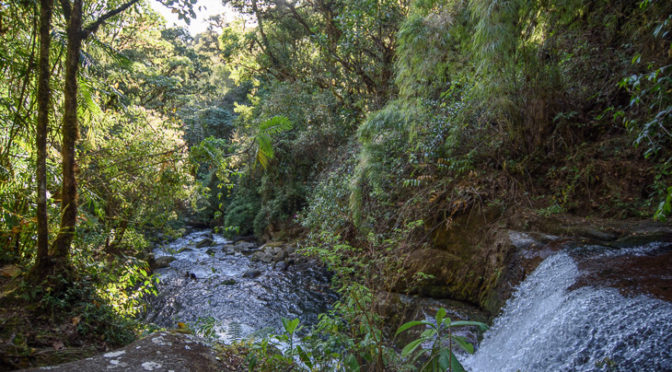 The long transfer to Trogon Lodge was quicker than I had expected and I arrived in the early afternoon having left at 9.45. We returned to San Jose by a different road through the Braulio CarrilloNational Park but it was less scenic than the outward journey because of the heavy traffic and the high trees on each side which obscured any view. After passing through San Jose and Cartago at about 1000m above sea level, we ascended to a high ridge at 3000m for much of the rest of the journey. The final part was a steep descent on a rough road to the lodge at 2500m.

The cabins were laid out in pairs on the steep hillside between the road and a river with small waterfalls. There were several ponds full of trout in the beautifully laid out grounds. Here the climate was much cooler of course and some of the garden flowers known in Europe such as agapanthus, lilies, fuchsia, gunneria and red hot poker thrive well. The cabins have gas-fire heating but in the afternoon in the sun it becomes quite hot. The first afternoon I made a walk past the waterfalls and through the jungle on the other side of the valley. There were lots of bromeliads, creepers, ferns and lichen but I did notsee any orchids in flower.