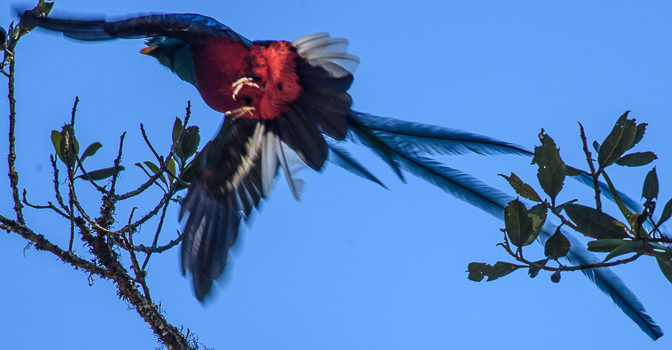 At 5.30 the next morning a group of seven guests met in the lodge to start the Quetzal tour. It was still fairly dark and very cold and the guide spotted a small patch of frost! The search for this mythical bird with its enormously long tail feathers was quite successful. We saw plenty of quetzals mostly from the road just above the lodge but the lighting was not good for photography. Some people took photos through the guide’s telescope with their smartphones which seemed to work surprisingly well.

After breakfast I spent the morning in the garden and went on the birdwatching tour in the afternoon. This time there I was the only participant and the tour consisted only of driving a short distance down the road and looking for the birds in the bushes. The young man guide of course saw a lot more tha I would have seen myself and I was able to photograph several humming birds, even one on a nest but in a very dark place. There were many other birds the most attractive being the Flame-coloured Tanagerbut nothing larger such as a toucan. The birds shown are: Long-tailed Silky-flycatcher, White-throated Mountain-gem, Volcano Hummingbird, Magnificent Hummingbird, Fiery-throated Hummingbird, Torrent Tyrannulet, Yellow-thighed Finch, Rufous-collared Sparrow and Collared Redstart.