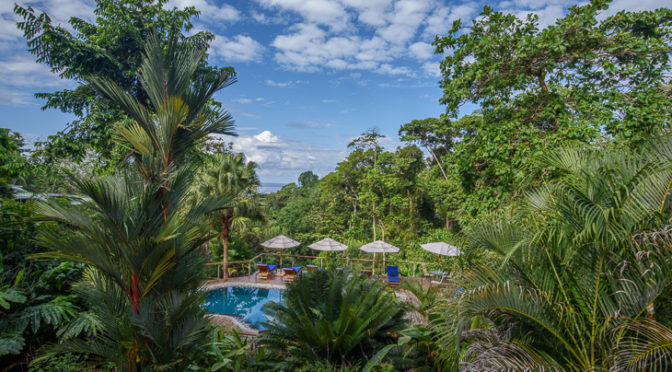 The first excursion was a birding walk starting at 5.30am. We drove back to the edge of the forest and saw a range of birds including Little Blue Heron, White Ibis, Yellow-headed Caracara, Crested Caracara, Green Kingfisher, Bare-throated Tiger-Heron, Great-tailed Grackle and many others although often far away. There were also two agoutis and both three and two toed sloths to be seen.

This lodge was very luxurious lying in the middle of dense jungle on a slope about 150m above the Pacific Ocean, which I could see from my large balcony. My room was very spacious and some were even larger with their own private mini-pool. Unlike at the previous lodge it was hot here all the time even at night. Lower down in front of my balconywas the main swimming pool. Sometimes wildlife could be seen directly from there. There were Black-mandibled Toucans and even Scarlet Macaws although I was too slow for a photo of these. Once when I was in the pool I was inspected at close range by an inquisitive coati mundi.

There was quite a range of trails to follow and of course one could walk down to the beach in about 20min. This was quite fantastic, a golden sand beach backed by high jungle and palm trees, with no sign of a building anywhere. In the afternoon I walked down to and along the beach. It is very beautiful with a few small creeks or lagoons and at the far end a series of flat rocks. However it was not safe to swimin the sea itself because of the strong currents. Back at the lodge the sun was just setting over the water.