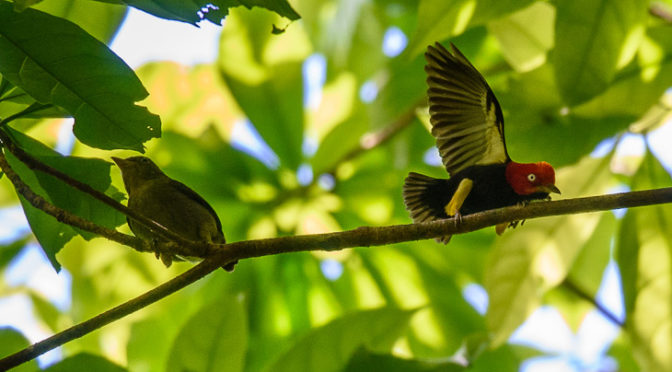 This morning I made the so called long hike with the same guide, now just the two of us. First sighted were a pair of Black-mandibled Toucans and then some ground dwelling birds: a Great Tinamouand a pair of Great Curassow. These turkey size birds have become very rare because of being hunted for food. Both male and female sport a fine crest but the colour of their plumage is quite different. The male is jet black with a bright yellow wattle while the female has a black and white head and tail with brown body and wings. Quite different was the Michael Jackson bird, so called because it dances backwards and forwards along a high branch during its courtship display, its real name being Red-capped Manakin. The display dance is quite similar to that of the birds of paradise in New Guinea.

Noises high in the treesgave away the presence ofa troupe ofSpider Monkeys. They are very acrobatic and together with the Howler Monkeys are the largest species of monkey native to Costa Rica.

The next attraction was a nest of the leaf cutter ants. Stamping on the ground caused hundreds of soldier ants to swarm out to protect the nest. The guide demonstrated with the aid of his hat how strongly they can bite into something and they do not let go easily. Further on we walked into what I called the triffid forest,consisting of walking palms, which really can move by growing new roots on one side and abandoning the old ones on the other side. Near a solitary red flower similar to a passion flower the guide spotted a tiny brown frog, non-poisonous and very well camouflaged.

Returning via the suspension bridges near the lodge we could observe a troupe of Howler Monkeys resting in the nearby trees, it now being almost midday and quite hot.