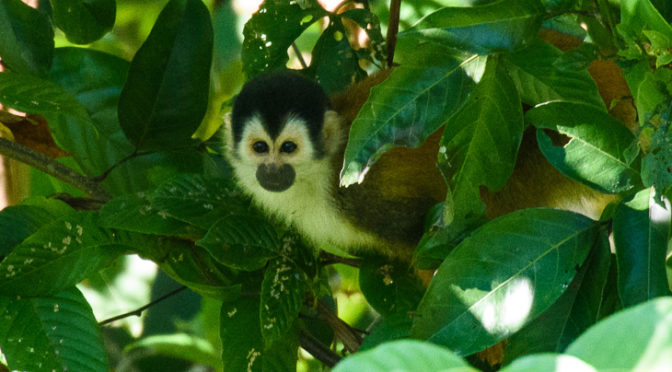 I set out in the morning on my own to explore one of the remaining trails and was fortunate to see the Jesus Christ lizard, which is able to run on water to escape predators. Particularly the juveniles which have a more distinct stripe down their backs are able to perform this feat. They are also known as Basilisk Lizards of which there is also a bright green species.

The trail leads through the forest to two small waterfalls with pools which are deep enough to cool down in, but not for swimming, although a strong shower can easily be had.

I had been hoping to see some more monkeys of species I had not yet seen on the trail but none were forthcoming. When I explained this to one of the staff at lunchtime, she looked over the side of the veranda and immediately discovered some squirrel monkeys! I just had time before they disappeared to take picture, one of a head without a body and one of a body without a head, the rest being hidden in the leaves.

In the afternoon after a rest by the pool I walked down to the beach again just before sunset, noting the face carved on a tree stump which marks the end of the path to the beach. I had had difficulty in finding this on my first day having come down a different way. Now I had been on practically all the available trails except the river walk which I then booked with a guide for the next day.