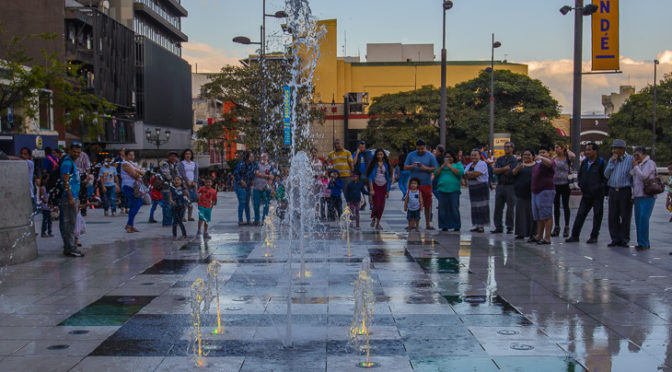 I had a last swim in the pool before saying good-bye to all the staff including the manageress whom I had not met before. She was very nice, quite young, quite attractive and quite pregnant. There were no stops on the return drive to Puerto Jimenez since it had been left to the last minute, but no problem.

The flight in the small plane (20 seats) was good with views over Costa Rica as we flew along the Pacific coast. No waiting around or problems with my heavy hand luggage. They weighed me together with it, at 88kg I was within limits, but there was nowhere to put it in the plane except on a seat. Fortunately the plane was not full.

It was strange to be back in civilization after so many days in remote places.There was a major traffic jam between the airport and the town due to the renovation of a bridge. After arriving at the Don CarlosHotel I went straight out to see San Jose but I did not find it very attractive. Even the much touted National Theater is not so special, despite a large modern piazza with a fountain next to it. I walked mostly along the main pedestrian street which was full of people. All other roads are full of noisy traffic. The shops seemed to mainlysell cheap clothes and it took me a long time to find a souvenir shop. There was a better one in the hotel which was altogether the best place to be. It is a historic building that was originally a private house and still contains many art works from that time: paintings, statues and stained glass. It also boasts a nice open courtyard, something I could not find in the town. There are no outside cafes, perhaps because a cold wind blows through the streets. At 1000m above sea level there is a constant spring like climate there. It was a step towards my re-acclimatization to the European winter, which I would meet again the next day.