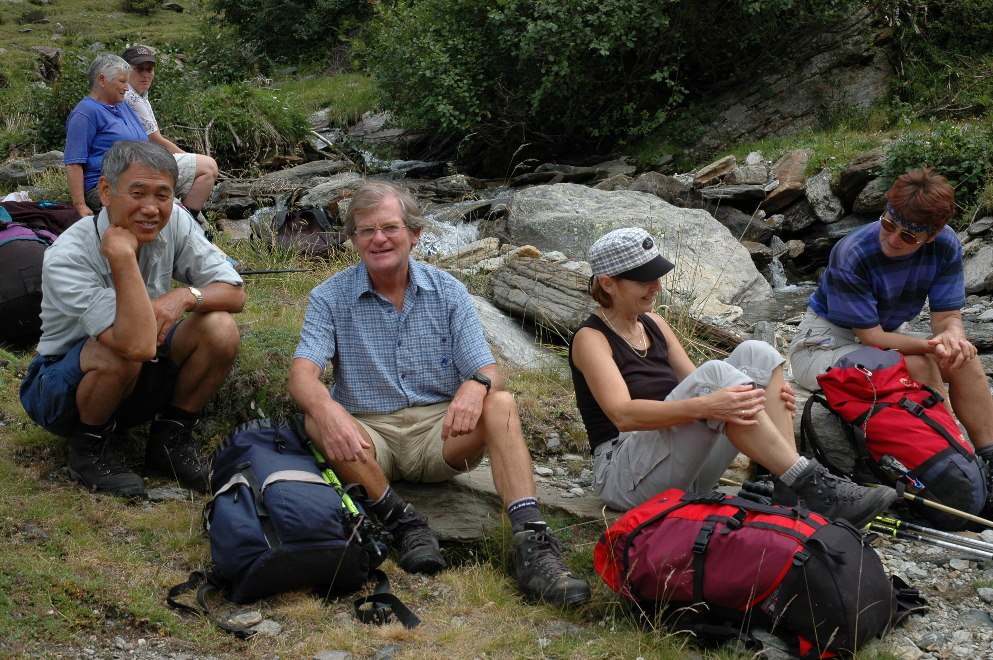 16 = 14 Old+2 New hiking members gathered in Basel SBB, departed 07:10 by train, observed the famous church of Wassen three times, and entered Tessin via the Gotthard Tunnel. A PTT/Private bus took us from Biasca to Lago di Lozzone (1609m). Following the way through a narrow dark tunnel, we entered into val Carrassino, a lonely valley with two farms. I thought our trip was over for the day when we climbed the path up to a Swiss flag, but it was of the Capanna Adula SAC (2000m). While waiting for Adrian’s arrival, the rest of our members (the so called express group) started to move off in the other direction, and I soon understood that our cabin for tonight’s sleep was still far over my head with a tiny Swiss flag on the cliff.. That was the Capanna Adula UTOE (2393m). The comfortable (10km) Wanderweg ended here, and we had another +400m, steep mountain path (3km) to climb up. When I was quite near to the hut, it became suddenly dark with misty fog, but all of us reached the hut safely. Less than one hour later, a thunderstorm started with lightning and noise. We were thankful for our good luck that we started from Basel so early in the morning and that all of us reached the hut without getting wet at all. Many mountaineers arrived after getting completely wet in this storm, and all the guests appreciated the warmth of the fire burning in a stove and hot soup served at the table.