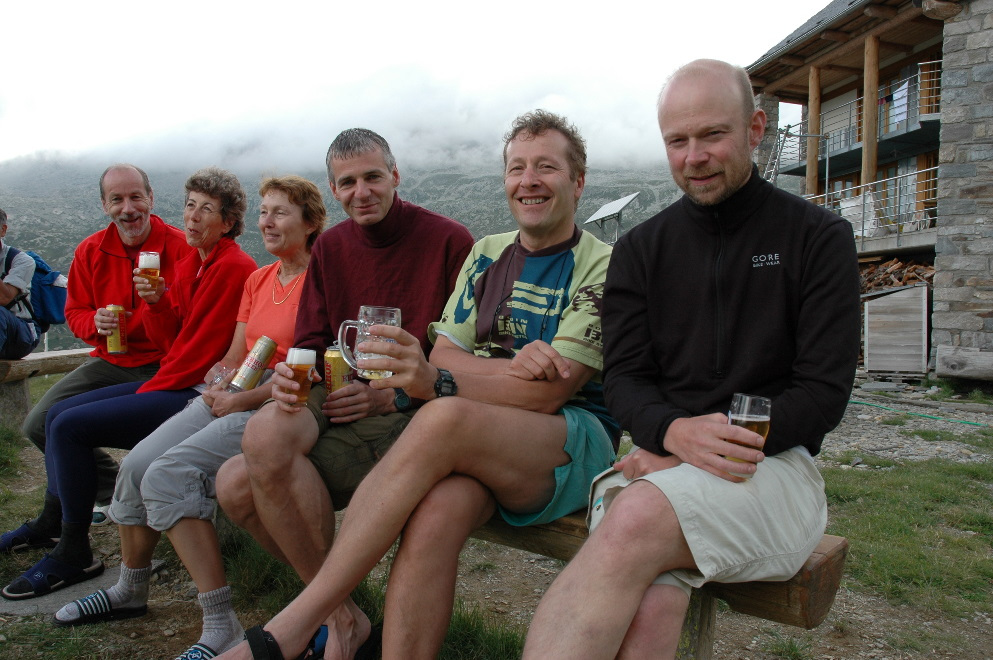 Next morning we were surprised to see that our cabin was surrounded by a hundred black goats. They were very friendly to everybody, but were searching for something in our rucksacks. Leaving the cabin and the many goats at 8 o’clock, we started walking upwards to Passo del Laghetto (2646m). While crossing a small river coming down from Rheinwaldhorn, I learned that some of mountaineers who arrived late last night at the cabin had to wait almost one hour here in the rain before they could cross. After two hours of walking (4km) we reached a small lake on the Passo Laghetto. While having a drink I noticed that the heads of some of the express group went suddenly out of my sight, and I saw our way went into a narrow crack filled with rocks and stones to the bottom. It was the most interesting part of our route. The Wanderweg went almost vertically down to the bottom of this gully. To the north we were supposed to see the peak of the Adula (Rheinwaldhorn 3402m), now hidden by fog, and to the south, far away down below (3km), we saw a cabin: Capanna Quarnei (2108m) for our second night‘ s sleep at the end of this peaceful valley, which seemed similar to Engstligenalp at Adelboden.

As we reached this cabin before 2 pm, we decided to climb towards the peak of Pizzo Cramorino (3112m) by way of a small lake: Laghetto di Cardedo (2605m), which is located below the Vogelberg group with glacier named Paradise. The way was marked, but it was not easy to walk up (4km), or to come down. After two hours we reached a small lake with water and snow, but nobody dared to swim here even though it was recommended by Adrian. During a lunch, we decided not to climb further, since the upper part of the mountain was still covered by cloud and it would not clear any more. We came back the same way (4km) to the cabin at 5pm and the supper was served at 7pm. It was impressive to observe the narrow crack of the Passo del Laghetto to the north, and to the south, the wide mountain range of Gana Bianca (2842m), Gana Rossa (2787m), and Piancabella (2670m), whose eastern slope we would walk around tomorrow.