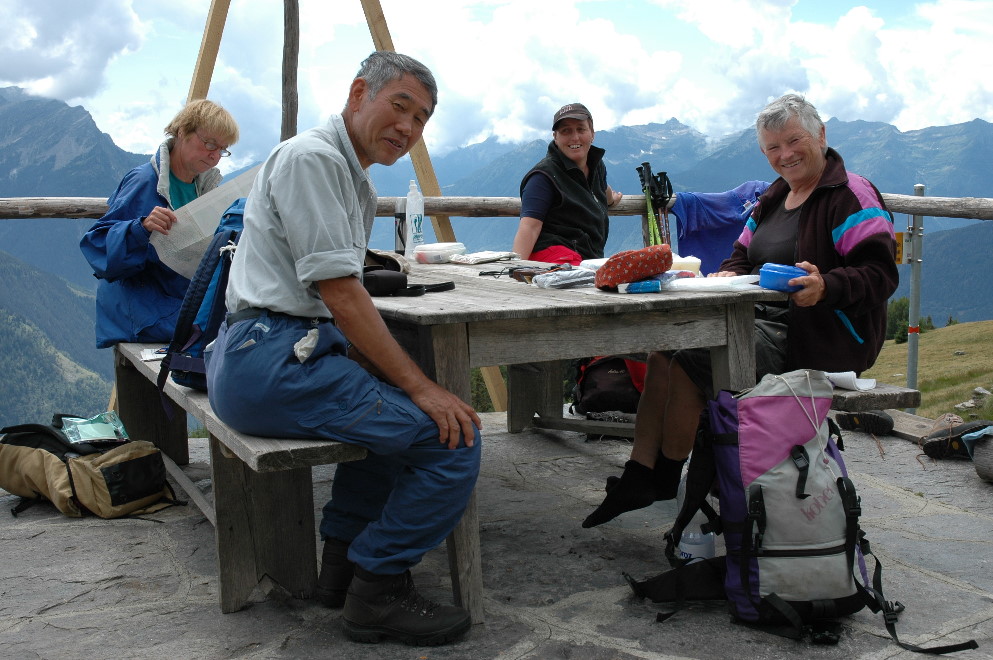 Departing from the cabin at 8 am, we moved to the other side of mountain just facing the cabin. When had ascended by 200m, we were suddenly covered by fog for a while, and so even the express group had to wait for the rest to arrive. As it cleared again, we crossed a field of huge rocks which could be nicely observed from the cabin, and reached a meadow with some cottages which was quite isolated from anywhere. After a horizontal way for few km, we had suddenly to climb up in the forest without reason, but we were on the right way to Alpi di Plato with cottages and vacationers. After a short lunch at the cabin of Prato (2000m), half (=express group) of our members decided to walk down (-1600m) on foot to Malvaglia (370m), and the rest would take a gondola from Dagro (1363m) to the valley. There was hardly enough time to go in the river for a short swim before the bus came for Biasca. All of our members, separated in two groups, were surprised to meet together in the same bus, and to be at the Biasca station at the same time.

During our three days in Tessin, the weather permitted us to remain dry, but the fog hindered us from observing the peaks of Mount Adula. After coming out the Gotthard Tunnel by train, there was sunshine with rain, and we observed a rainbow behind the church of Wassen also three times. After the tunnels of the Axenstrasse, Mythen looked very gracious in the evening sunshine and cloudless blue sky.

I am sure that all of us enjoyed this mountain hiking in Tessin very much. We saw many romantic landscapes with peaceful meadows. It was different from the mountains of the Berner Oberland or Valais. The hiking path seems not so hard to walk, but it takes quite a time to cross a distance which seems near to the eye.

We all thank Adrian for his planning of this tour, and his collaborator, Hanspeter, who went himself to the spot a month before our trip in order to make sure of the way and hiking conditions for us. During this hiking tour I observed that some members prefer to keep their own walking step and rate, so that we were split into three small groups according to walking speed. As Adrian collected all of us from behind, we were always together at the meeting point. It functioned excellently in itself, and all of us could make optimal performance according to our individual physical conditions. We finished this hiking tour with satisfaction, and wished each other that we would meet again at the next trip.