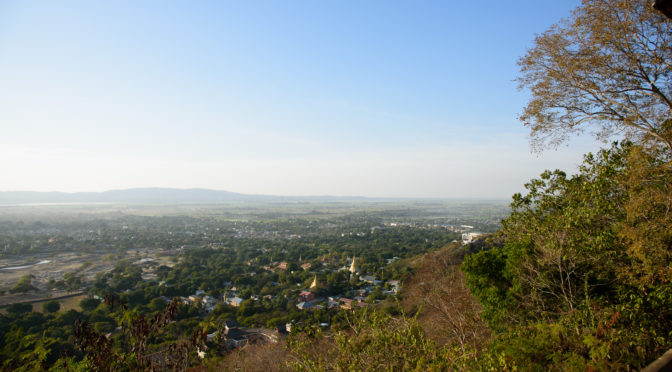 The last capital of the Myanmar kingdom, Mandalay not only offers sights within the city, but has a number of nearby historical attractions within a 3 kilometre radius – from cool hill resorts to nostalgic market places, from an ancient palace to a river ride up the famous “Road to Mandalay”, the Ayeyarwady River, or a ride in unique trishaws or horse-drawn carts.
We left the hotel in Yangon at 6.00 to catch the flight to Mandalay and arrived at about 11.30. The Silver Swan hotel was bigger and better than the first one, but somewhat less personal. During the day we visited 3 pagodas with all their surrounding buildings and sights.
The first was at the edge of a huge area which had been a royal palace. The monastery is a masterpiece of traditional Myanmar woodcarving techniques and architecture. It gives an idea of the previous splendor of the King Mindon’s palace complex, a golden city within a city, which was however tragically destroyed by allied bombing during World War Two. An exact replica of the old palace is now being built inside the walls.
The second one was the Pagoda built by King Mindon in 1857. Within its premises may be found what is popularly known as “The World’s Largest Book” – the complete Buddhist Scriptures inscribed on 729 upright stone slabs surrounding the pagoda.
Finally we climbed the approximately one thousand steps up Mandalay Hill to have a bird’s-eye view of the city, the outlying areas of the Ayeyarwady plains and the misty Shan hills. Along the way there were colourful souvenir stalls, the Pershewar Relics, possibly the world’s only authentic bones of Buddha and the gold-plated Shweyattaw Buddha of immense size. The climb has to be done bare foot, which I do not find at all comfortable, but we could take a small pick-up truck back down, as some of the group also did going up. The pagodas are certainly impressive and the monks are friendly, holding conversations with the visitors.