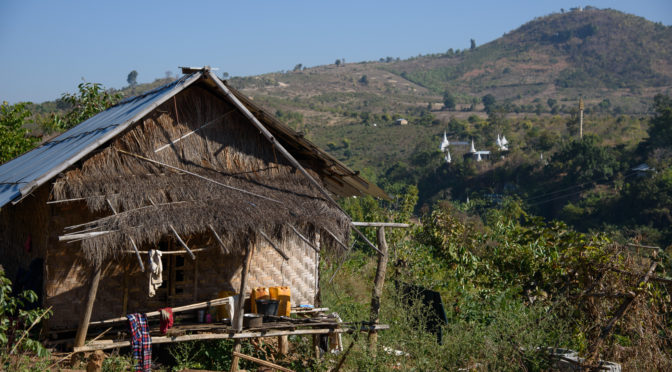 This was called a ’ Wanderung’, even a ‘Bergwanderung’, but actually more time was spent viewing monastery schools again than actually walking. We walked through scrubland with a few taller trees and some fields, passing 2 villages on the way. Attached to the first village was a quite large monastery school, where we were able to photograph the novice monks and other school children. Just as we were leaving it turned out to be their mealtime in a large open hall, so we stayed to watch that. The food was all served on the table for them and they ate with their fingers from their large rice bowls on their laps. Finally moving on we called briefly at a shrine in a cave and continued through some banana trees.
At the next village school there were no monks, but the children gave us a rendering of twinkle-twinkle little star with accompanying action standing on their benches.
At some of the shrines children sell their drawings to tourists. I bought some of these drawings for my grandson since I thought they would interest him. He actually took them to school to show his teacher and classmates.