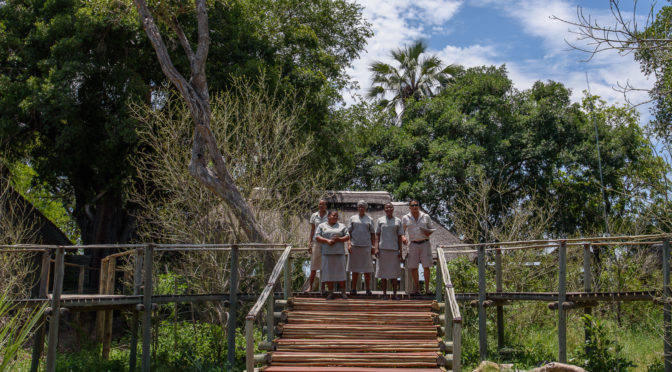 Botswana is a land-locked country located in Southern Africa and bordering on Namibia, South Africa, Zimbabwe and Zambia. The bulk of the Kalahari desert falls within Botswana’s borders and Botswana is home to most of the world’s San (bushman) population. Botswana is famous for its wildlife, areas like the Chobe National Park, Moremi National Park in the Okavango Delta and the Central Kalahari Game Reserve have a very high concentration of game. The economy, one of the most robust on the continent, is dominated by diamond mining and tourism.

A Botswana safari is one of Africa’s top experiences for visitors. Vast tracts of wilderness in pristine condition are home to huge herds of game, roaming unrestricted between the Kalahari’s plains and the waterways of the Okavango.

With its network of private ‘concessions’ dotted with just a handful of small, well-designed safari lodges, Botswana safaris offer near exclusivity. Whether you’ re watching lions stalk their prey, or taking a magical mokoro trip along narrow, reed-lined channels, you’re unlikely to come across any other visitors. The game here rarely disappoints and the birdlife can be spectacular.

As a tourist destination, Botswana has traditionally opted for a high price / low numbers formula, in part as a conservation strategy, and also to differentiate itself from neighbouring tourist countries which follow a mass market tourism policy. In many respects though costs and quality compare to neighbouring South Africa. However the two jewels in Botswana’s tourism crown (the Okavango delta and Chobe National Park) are quite exclusive.

The earliest inhabitants of Botswana were the San, who were followed by the Tswana tribe (Batswana). Today the Batswana people make up roughly 50% of the population and other dominant tribal groups include Bakalanga, Hambukushu and the Ovaherero.

The original Botswana artists were everyday crafts people who injected individual aesthetics into utilitarian implements such as pottery, fabrics and tools. Botswana is known for its exquisite baskets and which employ designs with names such as Tears of the Giraffe and Urine Trail of the Bull.

The orderliness and structure of the town-based Tswana society impressed the Christian missionaries, who began to arrive in the early 1800s. None managed to convert great numbers of Tswana, though they did manage to advise the locals, in their dealings with the Europeans that followed. Meanwhile, the Boers began their Great Trek over the Vaal, crossing into Tswana and Zulu territory and many Tswana went into service on Boer farms. By 1877, the British stepped in to annex the Transvaal, thereby launching the first Boer War. Upon independence on 30 September 1966 the formerly British protectorate of Bechuanaland adopted its new name, Botswana.

Almost 90 percent of citizens speak Setswana as their mother tongue and, although English is spoken throughout the urban areas and within all tourist facilities, though you may have to try a little harder to be understood in the rural areas.

Botswana was economically transformed by the discovery of diamonds near Orapa in 1967. Although most of the population remains in the low-income bracket, this mineral wealth has provided the country with enormous foreign currency reserves. Maun is the regional centre of Ngamiland (north-western Botswana) and is principally the service centre for the safari industry. It is relatively advanced, in African terms, with an international airport, two open-air shopping malls, three banks and numerous hotels and lodges. Regular flights arrive & depart from Johannesburg, Victoria Falls, Gabarone and Windhoek. The population of Maun and its environs is estimated at 40,000.

The Okavango delta forms part of the Kalahari Basin, situated at the southern periphery of the Great Rift Valley (of East African fame), and covers an area of 22,000 square kilometers. The delta can be divided into four regions; the panhandle, in the northern most reaches, the permanent swamps in the upper region, the seasonal swamps in the lower region and a large number of large landmasses, such as Chiefs Island, which occur as large islands or which extend into the delta from the surrounding mainland areas and are referred to as sandveld tongues. This an area of unusual beauty and striking contrast. Whilst the periphery is semi-arid, the delta itself is a patchwork of cool clear streams, peatlands and forested islands in the permanent swamps, and floodplains and ivory palm islands in the seasonal swamps. In the dry winter season one of the most spectacular events in the natural world occurs, floodwaters that have traveled 1000 kilometers from the highlands of Angola infiltrate the delta inundating large areas.

Many species of wild animals, which move into the surrounding savannas during the wet season (summer months Dec/Feb), concentrate therefore around the delta at this time. There are an estimated 9000 species of flora and fauna in residence in the delta throughout the year.