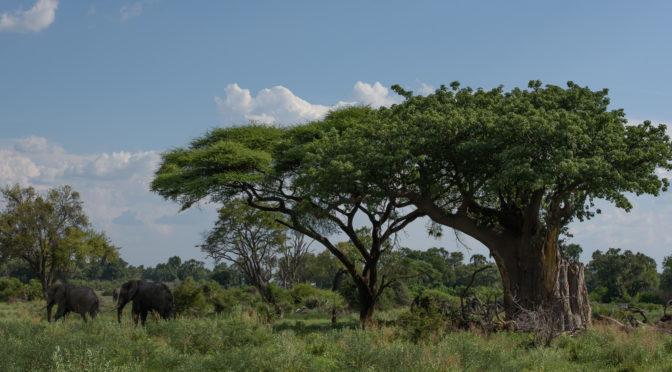 In 1962 the local BaTawana people set aside a third of the Okavango Delta to protect it for the future. They called this the Moremi Game Reserve and it encompasses a large area of the Delta’s wetlands and the main dry peninsula that juts into the Delta, known as the Mopane Tongue. Moremi is lush and varied – a patchwork of lagoons, shallow flooded pans, plains and forests. It is one of Africa’s finest areas for wildlife, with particularly high game densities. The animals found here are numerous and relaxed, often allowing vehicles to approach closely. The finest area is probably Chief’s Island, where several of Botswana’s top safari camps are to be found, including Mombo Camp.

Mombo Camp is the flagship Wilderness Safaris’ camp in Botswana, and certainly one of the most exclusive photographic safari camps in Africa. It overlooks a floodplain at the northwestern end of Chief’s Island, deep within the Moremi Game Reserve and  has a reputation for excellent service, luxury accommodation and exceptional game densities. Elephants approach right up to the camp buildings and one was causing a nuisance by regularly breaking the balustrade of the raised walkway between the tents.

The Mombo concession was also the site of the reintroduction of black and white rhino in the early 2000s. Having been effectively poached out of northern Botswana by the early 1990s, their reintroduction has been a hugely important project, although they remain elusive and sightings are rare. However my guide spotted a male white rhino following a female on my first safari drive.

This was followed in the evening in the corral area of the lodge by a show of singing and dancing given by the lodge staff. The dances imitate the behavior of the animals.