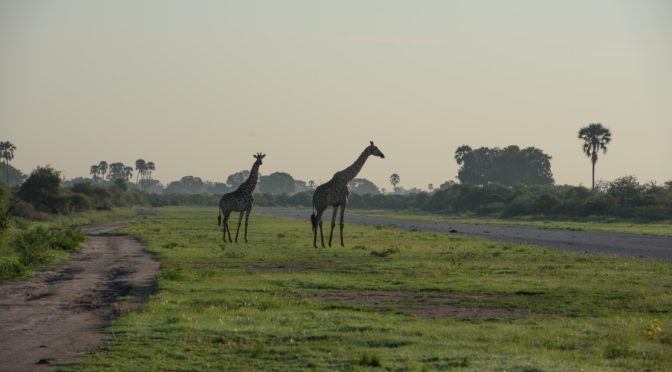 The Savuti is a region within the Chobe National Park that is secretly located away from the peak season crowds at the Chobe riverfront. It is the remote home ground of three Camps, Savuti, Kings Pool and Duma Tau positioned on the banks of the Savuti Channel and the Linyanti river close to the famous Savuti Marsh. Travelling to these camps involves a light air transfer from Maun in the South or Kasane in the North to the Savuti airstrip. It is an approximately 40 minute flight from either of the towns and the view from the aircraft plane over the beautiful Chobe becomes a part of the experience. From the  Savuti airstrip guests are driven the last 20-40 minute journey to the camp. This road transfer can be considered more of a game drive, as it traverses through the Chobe National Park and there is a good chance of spotting any number of animals, such as giraffes on the airstrip, before even arriving at the camp.

The Savuti Channel has a fascinating history of flooding and drying up independently of good rainy seasons and flood levels elsewhere. The dead trees in the channel tell of a long non-flowing period. Savuti has been the subject of numerous wildlife documentaries such as The Stolen River, Eternal Enemies and Patterns in The Grass to name a few. It is also home to small exhibits of bushmen rock art. Savuti is generally at its peak, game wise, at the end of the rainy season (Mar-May) when large numbers of zebra and wildebeest move through the area from the Linyanti, further west, to the sweeter grasses on offer in the Mababe depression, to the south. For the remainder of the year there are generally excellent concentrations of plains-game, particularly elephant, around the river and waterholes in the area.