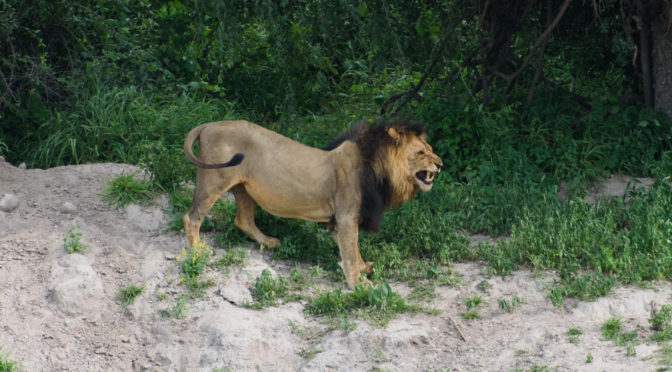 The large prides of lion are common and nonchalant having learnt to hunt the huge herds of buffalo and elephant. On the boat trips we encountered the carcass of an elephant which had not been killed by lions but died of a disease. Nevertheless a pride of lions had soon located it and were making the best of their find. There are strict priorities in the feeding ritual depending on the hierarchical status of the members of the tribe. Any violation of these resulted in disputes and sometimes fights between the pride family members. Whilst we were watching the dominant male lion picked a fight with a younger male. In the ensuing battle some of the females came to support the younger male. However it is all within the family and the fights are not as serious as they may appear. The adult lion did not bare its teeth and no blood was drawn.

When the pride was not feeding a single lioness would guard the carcass and chase away the large numbers of vultures which had collected. Crocodiles were also lurking at the edge of the river waiting for their opportunity. On the final morning before my departure the lionesses had withdrawn to the shade and the sight was dominated by the vultures and some marabou storks.