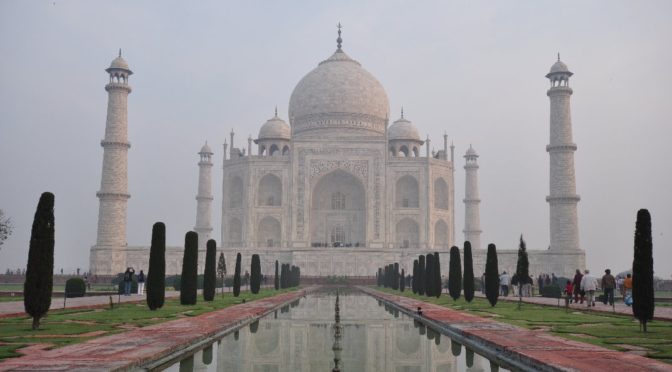 I joined a group of 16 people on a two week visit to Southern Rajasthan, Agra and the pilgrim city of Varanasi, organized by the Novartis Pensioners Association. We flew with Swiss from Zürich to Delhi and travelled as far as Udaipur by coach returning via Agra. Varanasi was reached by a short flight.

The interesting journey introduced us to an exotic mixture of cultures. Rajasthan has been invaded many times over the centuries by peoples from the North and each has left their influence. The multitheistic Hindu religion with its cast system dates far back into history. In the 6th century BC reaction against the power of the Brahman priests led to the foundation of the more ascetic Buddhist and Jain religions. Today these are only followed by relatively small minorities in India although Buddhism has successfully spread to many other countries further East. The Islamic religion and culture was brought by several waves of invaders and became well established on the Indian subcontinent. Despite the separation of India and Pakistan, India is still one of the countries with the largest Muslim population although they only constitute somewhat more than 10% of the total population.

The architectural sites which we visited reflected the historical development but chiefly showed the mark made by the last great invasion, that of the Mughal emperors. With their forts, palaces and temples they have left lasting monuments to their power and influence.

The first six Mughal Emperors from Babur to Aurangzeb are known as the great Mughals and I have included excerpts from Wikipedia briefly describing parts of their reigns on the following pages.

The Mughal emperors, from the early 16th century to the early 18th century, built and ruled the Mughal Empire on the Indian subcontinent, mainly corresponding to the modern countries of India, Pakistan, Afghanistan and Bangladesh. The Mughals were a branch of the Timurid dynasty of Turkic origin from what is now Uzbekistan. Their power rapidly dwindled during the 18th century and the last of the emperors were deposed in 1857, with the establishment of the British Raj. Mughal emperors were of direct descent from Timur (generally known in the West as Tamerlane the Great), and also affiliated with Genghis Khan, because of Timur’s marriage with a Genghizid princess.

The Mughals also had significant Indian Rajput and Persian ancestry through marriage alliances, as emperors were born to Rajput and Persian princesses. Only the first two Mughal emperors, Babur and Humayun, were fully Central Asian (Turki or what is now known as Uzbek), whereas Akbar was half-Persian, Jahangir was half-Rajput and quarter-Persian, and Shah Jahan was three-quarters Rajput.